Producing a new perfume:
footnotes to a video

The video shows the assembly first, of 135 ml of fragrance oil from my formula and then, of 900 ml of finished perfume by the blending of alcohol and water with the fragrance oil.

The purpose of the video is to give a visual representation of the perfume creation process. The fragrance being created here was developed for demonstration purposes rather than for marketing. Because of the focus on making the video, some errors were made in production—and edited out of the final video so you wouldn't see them. If this fragrance had been made for marketing (and, after some smell tests with what was made here, I might make another batch for marketing) I would have taken greater care with the measurements, starting from the formula itself.

There were some time constraints for this project as it had to be fit in between several other very demanding projects which could not be set aside. But here are some of my comments on the video as it stands.

The formula shown is the exact formula of this fragrance. What is not shown is the specific identities of the materials used. The letters stand for particular fragrance bases. The naturals are from specific sources and "cut" with an undisclosed amount of an undisclosed diluent. Patchwood (CAS# 77923-74-1) and Iso Butyl Quinoline (CAS# 65442-31-1) are powerful synthetics. Hedione (CAS# 24851-98-7) is a light, jasmanic, long lasting synthetic.

Producing from the formula

Ordinarily when I am creating a new fragrance, I'll weigh out several small sample batches and compare the weights between them. If, each time I measure the weight of the drops used when developing the formula, the weights in grams are very similar, I can trust those weights and perhaps average them out for the final formula. If, when weighing out one test batch, the weight of one or more ingredients is significantly off the mark from the previous batch, I'll create a third trial batch. When scaling, up from drops to grams and then to liters, I want to insure that I'm working with a valid formula.

For the production shown in the video, I just went with the first drops to grams formula as the project was for a visual demonstration, not a smelling.

The photography could have been better. When weighing out the formula, two camera were being used, one filming the readout of the electronic balance, showing the weight changing as materials were added to the beaker, and the other camera filming my hand as I added the ingredients to the beaker. Keeping the readout visible while keeping the scene well lit was awkward. There were also some problems with focus and white balance. These are technical issues in video production.

There was another problem which was not originally an error. When shooting the first scenes, the camera was set for a frame rate of 24, a "film" frame rate. When I started using the second camera too, it only shot at 30 frames per second, a "video" frame rate. For subsequent scenes the first camera was reset to 30 fps which also resulted in a quality adjustment. The video production software was not happy with these mismatches.

Although both cameras record sound, and although I commented to these cameras while the scenes were being shot, the final audio was recorded separately to provide the information I believed was important for the video when being viewed by someone who wished to do what I was doing. Some of that dialogue was, no doubt, boring to the viewer seeking only entertainment.

YouTube viewers delight in "fails" of ever description. Here the two fails were cut from the final presentation but I'll describe them to you. The first, a small fail that I could have kicked myself over, was for the first ingredient I was weighing... and went over by 0.9 grams. The video on the readout showed this. That shot from the camera focused on the readout was cut. That was the only major weighing error. 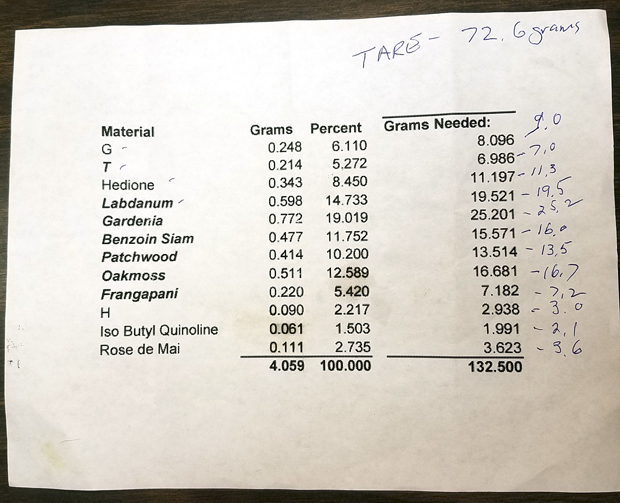 The other error was inexcusable and I have only myself to blame. The video talks about producing 900 ml of perfume. This would fit in a 32-ounce bottle and I had one on hand. But when moving the props from the laboratory to the studio, I grabbed a 16-ounce bottle instead and never noticed the difference until I tried to pour 900 ml of perfume into it. For your entertainment, I've posted the "fail" video here. That scene too was cut from this project but close eyed viewers will notice that the bottle being filled is too small.

The balance used here weighs only to the tenth of a gram so some precision is lost. (Obtaining a more precise balance would be quite expensive!) Additionally, the balance used here has the quirk of not immediately registering the weight of small additions to the beaker.

Thus, unless material is added slowly and the beaker rocked after each drop or pour is added, the balance will under weigh the beaker and contents until, at a certain point, the readout will jump—sometimes beyond your target weight.

It pays to spend some time working with such a balance before undertaking critical weighing.

As to the method of adding ingredients to the beaker, the material can be poured from a container until coming close—perhaps a gram or half gram—from the required amount. Then, using dropper bottles, the last fractions of a gram can be added with greater precision.

After producing the juice, I'll let it age for at least 30 days before I start bottling. This gives all the elements time to blend nicely. In the first few days I'll shake the bottle several times a day. At the end of the aging process, if I had been using certain natural materials, I would chill the mixture overnight and then filter it to get out any foreign materials (from the natural ingredients). With the materials I'm using, this will not be necessary.

Other videos in this series: