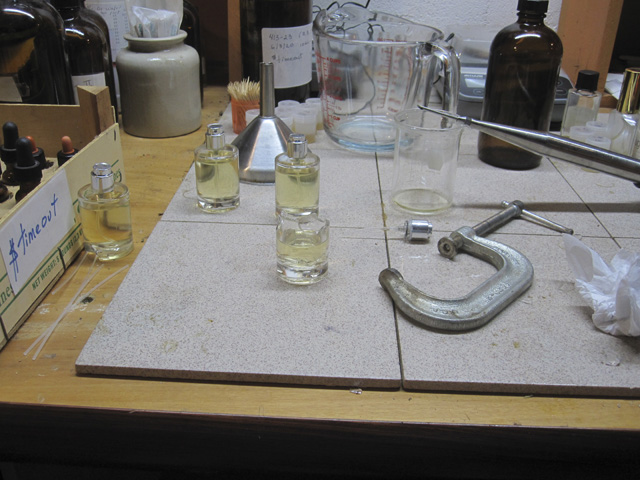 Scene of the disaster — I was attempting to attach press-on spray pumps to bottles filled with $timeout. It took more force than I had expected and, if the pump and bottle are not perfectly aligned, the pump goes on crooked and the top is damaged, as shown in the photo below. I thought perhaps a C-clamp could supply the necessary force but, as the pump and bottle and C-clamp were misaligned, the force simply shattered the neck of the bottle, as shown in the photo above.

Launching a new perfume in an uncertain world

Trying to attach a press-on fine mist spray pump by hand is difficult. If bottle and pump are not perfectly aligned, the pump goes on crooked and is damaged. Note the chip that was knocked out of the bottle when it was being used as the "top" — as shown in this video.

I had been writing about a new fragrance I was developing and then stopped while the fragrance was aging for the required 30 days. Now the aging days are over and I've launched the fragrance, it's called $timeout. The name is derived from a computer command that halts an ongoing routine for... some amount of time. When that time is up, either the old routine is restarted or $timeout switches you to a new routine. "$timeout" seemed like an appropriate name considering our current Corona virus situation.

I had planned to bottle $timeout with a press-on spray pump. Until now I had always used screw-on pumps. Crimp-on pumps are the industry standard as they are cheap and can be mounted by an automatic machine on an assembly line. But crimp-on pumps require some sort of machine, either manual or automatic. I have neither.

I was introduced to press-on spray pumps at a packaging trade show and told they could be attached to a bottle by hand... or at least it might be possible to attach them without a machine. I should have become suspicious when I couldn't find any of these press-on pumps from a U.S. source. But, when I saw press-on pumps and matching bottles advertised on the Plush Folly (U.K.) website, I watched their video and bought a small supply. Now I was going to use them for $timeout. It didn't work out.

It turns out that a good deal of force is required to mount a press-on spray pump to a glass bottle. The video shows a hammer being used with a warning that getting it right could be tricky. Pump and bottle must be perfectly aligned when the force is applied. Trying to do it by hand can damage the pump and even break some glass. After breaking two bottles and damaging three pumps I gave it up in favor of the bottles with screw-on pumps that I had on hand. This is the bottle shown in the picture.

How would you rate my new fragrance?

Launching a new fragrance on the internet without a celebrity endorsement or a ton of social media promotion is a risky path to success. But I want to give you an opportunity to experience $timeout under the most favorable conditions and so I am making a special offer here.