This Crown Perfumery Company bottle lacks a fancy "crown" stopper and is not labeled. Possibly it was used for smelling salts. Possibly this stopper is not original.

The Crown Perfumery was launched in 1872 in London by William S. (Sparks) Thompson, an American industrialist from Connecticut.

Starting in life as a dry goods clerk, Thnompson went on to found at least half a dozen successful enterprises. He was the first to manufacture crinolines in the United States and the first to manufacture corsets by machine. "Thompson's Glove-Fitting Corset" was a huge success on both sides of the Atlantic. Queen Victoria of England was a customer. 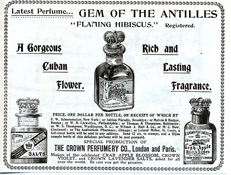 American Druggist And Pharmaceutical Record (1902) provides a somewhat less colorful account of Crown's founding. For a while Thompson made his home in Paris where he was manufacturing corsets on a large scale. In 1868 he branched out by purchasing a patent on a railway spring and established the Crown Iron Works at Glasgow. About 1872 Thompson discerned that the lack of popularity of English perfumes was the result of the lack of taste in their packaging. He organized the Crown Perfumery in London where he was now living and once again enjoyed remarkable success, particularly with his Lavender Salts and his Crab Apple Blossom perfumes.

In 1885 Thompson established the American Branch of the Crown Perfumery Company spending $100,000 on advertising "with the most gratifying results." To put this number in perspective, in the early 1950's an owner of the Chanel perfume enterprise remarked that $100,000 was required to launch and promote a new perfume. Thompson's $100,000 in 1885 was a huge investment.

After Thompson's death the company was sold to Lever Brothers (now Unilever) for £300,000. Lever used Crown to promote hair products, then closed it in 1939. In 1993 the Crown Perfumery Boutique opened to reproduce and sell Crown's most successful fragrances. In 2000 Clive Christian, the now owner, closed the boutique saving only eight of its popular scents. In 2001 Christian launched his own scents and by 2002, Crown was gone.

Perfumes By The Crown Perfumery Company

If you have any information on The Crown Perfumery Company, please share it with me using the message sender below.