In 1885, Moscow pharmacist Aleksandr Mitrofanovich Ostroumov (1858-19??) invented an antidandruff soap which he marketed to great profit and fame. Later, his Metamorphosa beauty cream turned him into an all-Russian celebrity. Metamorphosa was still available in the early 1920s. By 1900 the profits from his specialty pharmaceutical and cosmetic products gave Ostroumov the capital needed to launch his own perfumery. His company was awarded the right to display the state seal on his products showing that he was a supplier to the Imperial Court. (It is likely that the award was for his beauty products rather than his fragrances, although this is uncertain.) In 1910 Ostroumov founded the Institute for Medical Cosmetics at Tverskaya.

In the fragrance and cosmetics business, Ostroumov competed with French-owned Rallet and Brocard. Rallet held a high reputation for the quality of their fragrances and did much business with the large and wealthy Romanov family. Brocard won a strong position with the upper middle class, particularly with their soaps sculptured to please children, but Brocard, too, sold to the Romanovs. 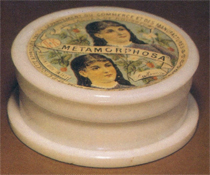 Like Rallet and Brocard, Ostroumov proved himself a clever marketer. To deal with Parisian fragrances that women found so desirable, he undercut Guerlain's mass market prices by 50 percent or more. Thus a Guerlain flask that might sell for 15 rubles was matched by an Ostroumov flask at just 4 rubles.

Beyond this, Ostroumov pushed the native, "all-Russian" heritage of his products. Opera stars were the celebrities of the day but rather than license their names as Rigaud had done with Mary Garden, Ostroumov named his fragrances for roles which were associated with particular stars. Thus his Lakme line of soap, cologne, and powder immediately suggested Bolshoi soprano Antonida Nezhdanova, who appeared as the heroine of Leo Delibes's opera, Lakme.

Likewise soprano Vera Liutse was associated in the mind of the public, thank to her Madame Butterfly role, with Ostroumov's Japanese Lilac. Ostroumov's publicity also pointed to opera stars Elizaveta Azerskaia and Leonida Balanovskaia. Ostroumov also provided stated endorsements from some of these stars. It is not known whether these were done with the approval of the various celebrities or whether he might have simply pulled them out of the air.

If you have any information you would like to share with us about A. M. Ostroumov, please use the message sender below.

The Scent of Empires: Chanel No. 5 and Red Moscow